On April 23, 2018, the Final of Singer2018 was wonderfully held. The champion was an English singer, JessieJ, who has been the first foreigner who won Singer.

—— Is it China’s version of the X Factor?

It was a program of singing contest that held by Hunan TV Station. Chinese singers and famous foreign singers were invited to compete in this show and provided the high-standard performance, so this show has aroused much attention from home and abroad. Since many people who watched this show would like to discuss it on social media, this paper discusses the international influence of “Singer2018” on twitter by analyzing the data of twitter users who talked about this show on twitter through some data visualization tools.

Is there anyone analyse the TV show?

Yes, there are a lot!

I used three journal articles as my references. They all have the analysis about domestic variety shows about vocal competitions from the perspective of communications and take the show, “Singer” of Hunan TV Station, as the analyzing example. Chen’s paper (陈月罡,2018) published on New Media Research analyzes the marketing modes of “Singer” based on discussing online and offline communications. This paper shows that the advertising before the contest and propaganda video after the competition created warm atmosphere. Wei’s paper (魏星，2017) mainly focus on the revelation from the creativity of the communication ideas of “Singer”. It also mentions that the audience’s talking about this TV show on social media was the secondary spreading. However, Ya and Xiao (亚明欣&肖涛,2016)mention the innovative strategies about communicating the TV show multiculturally in their paper. As for cross-cultural communication, they mentioned that “Singer” invited foreign singers, which highlights territorial inclusiveness.

What have I done?

Special time period: before and after the Final of Singer2018

I analyzed the twittersphere of Singer2018 and raise the research question that what impacts the communication of this show on Twitter most. I made a hypothesis before research that the invitation of foreign singers and the establishment of official Twitter account of Singer2018 have played important roles on twitters’ discussion on this show.

How do I analyse it?

There are some reasons for why I choose Twitter as my targeted analyzing platform. First, Twitter is an open and international social media for its users to express their ideas and discuss about the current event. Second, there is an official Twitter account of “Singer2018” and Hunan TV Station. Third, those twitters are from all over the world, which lays a foundation for examine the international reputation and find out some efficient publicity means for this program to enter the overseas media market.Since English is regarded as the international official language, most of twitters tend to use English to make comments on the foreign event. Moreover, this program has its official English name, so focusing on the specific keyword allows me to screen out tweets that are irrelevant to Singer 2018 during the period of broadcasting this program. Therefore, 2025 tweets that contain the English word “Singer2018” during April 10, 2018 to April 20, 2018 are collected.

All data of the Archive that collected has been imported into Tableau.

Three columns ( A: Source; B: Target; C: Type) were inserted in front of id_str in the Archive (TAGs). After algorithm, Column A, B, C were copied to an excel worksheet and then I sorted column C alphabetically. Retweets (A, B) were extracted into a new sheet and save as csv that finally was imported into Gephi.

The texts from 2025 tweets including “Singer2018” were uploaded to Voyant.

I took 153 samples from 2025 tweets based on the principle of “every 13th tweet” and  these 153 texts were the target content. As for the language of text, I divided it into 3 types: English, Chinese and other language. The types of the content are also divided into four categories: original tweets from official accounts of “Singer2018” and Hunan TV Station, retweets of official tweets, tweets including comments on “Singer2018” and other relatively irrelevant tweets. Moreover, tweets mentioned JessieJ, KZ Tangingan and Dimash who are foreign singers have taken part in this show were highlighted

What have I found?

Let’s look at something interesting…

The Peak Time of Tweeting 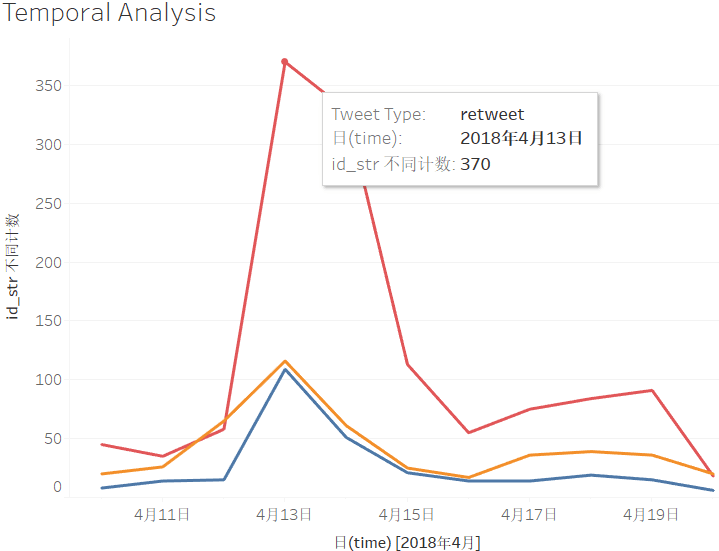 As for the Temporal Analysis from Tableau, the red, yellow, blue lines represent for the three tweet types: retweet, original tweet, and @mention respectively. It can be seen that three lines have the similar trend with the same peak on April 23, 2018 and the most tweet type is retweet. It means that people were most active on Twitter discussing about “Singer2018” on the day of final.

Through the full data of the point that circled with blue shape (4-1), most tweets were retweeted from @2018Singer and nearly all texts mentioned that Jessie J won Singer2018.

Compared the two bar charts of User Activity and User Visibility from Tableau, the most active account and visible account are “hunantvchina” of Hunan TV Station and “2018singer” of the programme group. There is no expectation that these official accounts tweeted much about Singer2018 and their tweets were retweeted most by others. 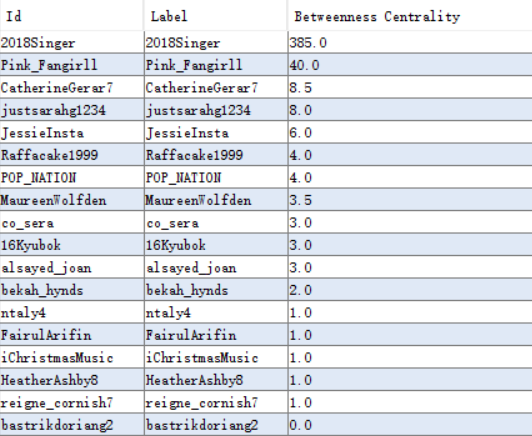 In the second pattern of Gephi (4-2-4), the color is arranged in modularity while the size depends on in-degree. It can be known that the twitter accounts whose tweets about Singer2018 were retweeted most by others successively are: @2018Singer, @Trendingweibo, @mjfelipe, @JessieJSpain, @UMG, @ClaudeKelly. Trending Weibo is about Chinese pop culture, such as drama, music, news, etc. Universal Music Group (UMG) stands for universal music group verified account with a large followers of 509,000. Another private Twitter users are entertainment journalist with 357,000 followers for ABSCBNNews from the Philippines and a song writer, Claude Kelly with 141,000 followers.

From 4-2-1, apart from the official accounts, there are another two overlapped accounts in the charts. According to their home pages on Twitter, @jessiejspain is an official fan club of @JessieJ in Spain, while @pink_fangirll is Pink’s fan account (Pink: American singer & songwriter) but this user also would tweet something about other western singers, such as JessieJ. It is worth noting that JessieJ’s private account (@jessiej) was always mentioned by other twitters.

From the word links of Voyant (4-3), it can be seen that “JessieJ” and “singer” are the key collaborators. When “singer” is taken out, “jessie” has become the key collaborator with “jessiej”. Therefore, it is more likely that users were talking about JessieJ when they were discussing this programme. 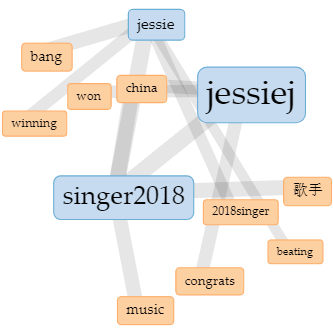 The pie chart (4-4-1) shows that more than 75% texts collected from the selected tweets are English and 16 tweets are written in Chinese. It is interesting that there are also other languages exist, such Russian, Italian, Spanish, Filipino and Catalan, which shows the cross-cultural communication of this programme.

JessieJ and KZ Tandingan are two foreign singers taking part in Singer2018 from British and the Philippines respectively. Dimash Kudaibergen from Kazakhstan showed a wonderful performance in Singer2017 and was invited to give a show on the finale episode on April 20. All three singers have the high status in music field in their countries even around the world, so their participation has drawn much attention and aroused heated discussion during their performance in China. There is no doubt that they have promoted the cross-cultural communication of music and helped this show to published in other countries. Therefore, those tweets that mention them are specially selected out to be divided into three categories. Not surprisingly, the result (4-4-2) illustrates that over two thirds of total coding tweets are about these three singers wJessieJhile the tweets mentions JessieJ for the largest proportion.

There are still quite a few people make comments…

As for the types of content (4-4-3), by eliminating the official tweets (5 tweets) from @2018Singer and @hunantvchina and other irrelevant tweets (25 tweets), there are 133 effective tweets of Singer2018’s audiences. Some twitters directly retweeted the tweets about this show from the official accounts, while most of them made some comments on Singer2018.

Among these original tweets of official accounts, as Chen’s paper mentioned, the content mainly announced the songs that singers would sang on the final night to attract more attention and the review of the final to continue this atmosphere. As for those singers who has been eliminated from the competition, the programme group also made exclusive advertisement for them, which shows their respect and gratitude to everyone who took part in the show they held. (4-4-4) Before and after the battle night, the producer of Singer2018 released nearly 30 tweets and retweets. According to Chen, the advertisement of high-density and high-frequency from Hunan TV Station could make the show impressed on the audience, which would naturally lead to high audience rating.

For those twitters who retweeted tweets from @2018Singer or @hunantvchina, most of them retweeted the congratulations to JessieJ and the performance of JessieJ with KZ Tandingan and Coco Lee. (4-4-5) There is no doubt that JessieJ have attracted many fans of this programme and helped Singer2018 entered overseas program market. According to Wei’s paper, the show has the social function of establishing interpersonal relationship. The watchers have a heated discussion on the show and let those who have not watched the show to be curious, which refers to the second transmission of the show.

It can be concluded from the result that most foreign audience pay attention to Singer2018 because of the famous foreign singers, especially JessieJ. They discussed about this show on Twitter most mainly through interaction with the official accounts (@2018Singer and @hunantvchina) and were active most on the day of final. As for the communication of Singer2018 on Twitter, Hunan TV Station advertised the show actively throughout the time during warm-up period to review period.

Admittedly, there also exists some limitation of this paper…

First, some accounts, like those of Tandingan’s and JessieJ’s fans, may appear to be missing from our study, because they may only make comments on their idol’s performance in Singer 2018 or post the video about her show but not mention the name of this program. Second, the keyword that can be used to run the data are so limited since this project should involve as much relative tweets or retweets as possible. Third, foreign watchers who will discuss about that program on Tweet are not so many, which means that the number of watchers on Tweet is far less than the total foreign watchers.

The findings still can give us some ideas about communication methods can the television station adopt to improve the international reputation and overseas ratings on twitter or other social media platforms; for example, invitation of the guests with international visibility to connect with the world, active online advertisement and interaction with the show’s fans to make the second communication. More further research beyond analyzing twitter data can be made to study this topic, which contribute to globally communication of China’s TV show. END_OF_DOCUMENT_TOKEN_TO_BE_REPLACED